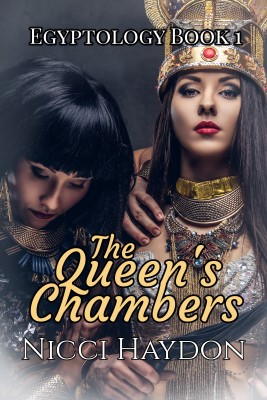 Before I even met her, I was in love with Professor Roxhana Rayes. I was fascinated by her story and wanted to follow in her footsteps: a woman who defied all convention to become the university’s first female Egyptologist, who made discoveries that turned her male counterparts green with envy. I saw pictures of her and fantasised about the two of us. Together.

But it wasn’t until a visit to Egypt’s Valley of the Kings, when I’d already been her student for years, that we finally turned the corner from friends to lovers. And God, it felt like the culmination of my life. If I thought her passion for old tombs burned bright, it was nothing compared to her passion for other women.

Then the strangest thing happened. In the burial chamber of Queen Ahset I must have touched something I shouldn’t. Because now I’m in ancient Egypt, a slave in the palace of Queen Ahset herself.

And while the pharaoh might look familiar, her sexual appetites are far more voracious than I’ve ever known…