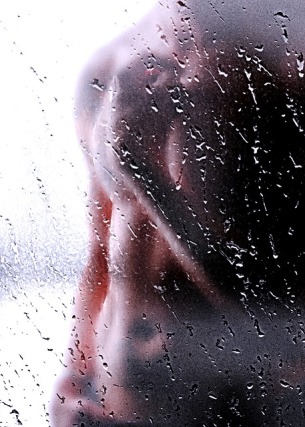 This is Part 4 of an ongoing story. If you haven’t read the rest of “Caught” I suggest you start with Caught Part 1, Part 2 and Part 3.

I smiled, trying to process what Coren had just said. Was he actually asking me to join him? “I…I don’t think so,” I said, cupping a hand over my cock. This whole thing was a mistake. I mean, I no longer even remembered why I had gone out into the hall in the first place. It was my fault that I was watching him, but that was really only for a second or two.

Coren shrugged. “Suit yourself. But the water is divine.” He rolled his head under the shower jet, breath coming long and slow as the steam swirled. His hand, unlike mine, simply moved up and down, up and down along his shaft, squeezing the head of his cock gently as his ball sack swung beneath. “Come on and go, get out the door, don’t you come back now any more…” I cringed as he started singing again.

I leaned back against the bathroom wall, closing my eyes. My cock was still as hard as rock, and a single hand was doing nothing to hide it. I let my fingers drift over the head, swirling around the tip, as my wrist brushed against the hem of my T-shirt. God, it was sticking to my skin, the mixture of sweat and steam making it stifling.

“Oh, fuck, man, you’re missing out. The heat from the water and the blood in my cock. It’s amazing.”

My eyes drifted open. I couldn’t help it. Coren was right there, just turning under the jet of water, stroking himself without any trace of self-consciousness. He seemed so free, and I still felt like the dirty little perv, watching and…

With a sigh, I dragged the T-shirt over my head and tossed it to the floor, then stepped closer to the shower. “Still room for two?”

Coren didn’t even open his eyes. His lips curled in a half smile. “Of course, step in.”

Gingerly, careful to keep my cock from brushing his skin, I stepped into the shower. There was enough room for two, but apart from the spray that bounced off Coren’s skin I couldn’t get right under the water. Instead, I stood there awkwardly, too afraid to-

“You afraid I’m going to bite or something, Ed?”

“Man, we get closer than this when we’re watching TV together. Come on, who cares if your skin touches mine? It’s only skin. Think of it like shaking hands.”

He shifted over, just an inch, but it was enough to make the invitation clear. I was nervous, this was the first time I’d done anything like this, but I think a part of me was also excited. It was taboo, different, maybe even socially dangerous. I slid in beside Coren, thighs and shoulders brushing against each other. The water rushed against the top of my head, ran down my neck, over my back. Coren turned my way and his cock slid against my waist.

“You want to borrow my shower gel?”

He grabbed it and passed it to me, and didn’t bother to look away as I squirted a little onto my hand and started to rub it into my skin. Bubbles lathered in my chest hair, spilled down my stomach to my crotch, caught on the top of my erect cock. Instinctively, I reached down, rubbed the soap over my stomach, then hesitated.

What possessed me in that moment, I can’t honestly say. Coren was taller than me, more muscular than me. Something about that made me feel playful. I smirked as I reached down between us, smoothed the bubbles along the top of my shaft, drawing in a deep, hitching breath as I did.

And then I turned my hand, and smoothed those same bubbles along Coren’s cock.