This is Part 2 of an ongoing story. If you haven’t already read Part 1 you should start there! 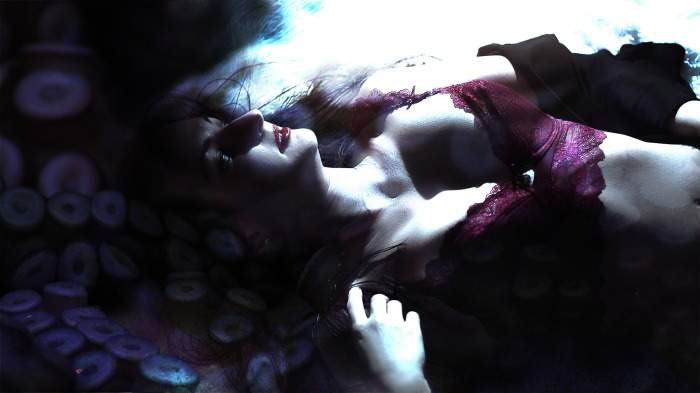 Agatha watched in horror as the tentacle slithered down the wall, its thick body undulating in its wake. She wanted to scream, but no sound would come. It couldn’t be, it wasn’t possible, it was some sort of dream – some sort of nightmare.

She turned away from the chancel, grabbing the edge of a pew as she tried to flee, then stopped, shaking her head, mouth falling open.

A second tentacle, as thick and ugly as the first, reached in from the door, feeling its way along the flagstones and around the corner into the aisle. Agatha turned her head, sweat breaking out over every inch of her body, staring first at the impossibly long finger, snaking and wrapping its girth around the cross, then at the other heading towards her down the aisle.

There was nowhere to go. Nowhere to run. She backed away, falling between the pews and kicking her feet to move backwards, but the tentacles were moving faster now and with purpose. It was clear that she was their goal.

When the first tentacle reached her, when its cold, leathery body touched her leg, she froze.

It reached higher, under her skirt, along her thigh, and then stopped.

In the silence, Agatha could hear her own breath, rasping in her lungs, echoing in the empty space. The scent of smoke from the extinguished candles drifted in the air. Her heartbeat thundered in her chest. The tentacle, heavy and cool and ever so slightly pulsating, sat still, touching her inner thigh, just below the line of her underwear.

“Tell me your desires, Agatha. Tell me what you want.”

The voice boomed in the church, shaking the floor beneath where she lay, making the chandeliers rattle on their chains. Agatha scanned the interior, but there was nobody there. Only the thick, red-and-black bodies of the tentacles, undulating in the darkness.

Why couldn’t she get the words out? Was it so hard to ask for what she wanted?

“Tell me, Agatha. Tell me what’s in your mind, right now.”

“I want to…” leave. That’s what she wanted to say. What she should say. God would save her if she only asked.

She shook her head. Her breasts rose and fell with each heaved breath. Her pelvic muscles clenched and she drew a sharp breath as the tentacle slithered just a little higher, teasing her, wriggling under the hem of the lacy, red panties.

Whoever he was, he knew her secret desires, the things she wanted but dared not ask for. The reasons she dressed so prim on the outside and like a slut beneath. She wasn’t sweating with fear. Her pulse didn’t race because she was afraid for her life or her soul.

“I want it all,” she whispered.

The laugh that rang out in the church was pure delight. She felt a smile crease her own lips as the tentacle between her legs flicked at her sex through the fabric of her underwear. Agatha bit her lower lip as the devil’s finger caught her nub, sending a pulse of sensation through her spine. She arched and cried out in sudden ecstasy. “Oh, Jesus!”

“Not him,” said the voice, and the laugh rang out again.

The second tentacle had altered its path, snaking along the pew in front and then coming in behind her. She caressed it with a lazy finger as it crept alongside her body, dragging the edge of her skirt up and out of the way before stroking her leg, ankle to hips and then up to her waist.

“Why so many clothes, Agatha?”

Why indeed? She hastily unfastened the buttons on her coat, throwing it open, then moved to those on her blouse. She felt constricted by so much fabric, unable to breathe. The buttons came undone easily, and she let the cotton fall away, leaving her skin bare and glistening with sweat.

The first tentacle continued to lick at her dampening sex, gently bringing her off while she squirmed. The second continued its journey, up from her waist, over her belly. She reached out one hand and gripped it, its skin silky and smooth. With her other hand she touched her breast, swirling a finger around her nipple through the fabric of her soft red bra.

Her body, still so young, still so innocent, never touched by anyone save her husband, responded eagerly to the attention. She felt her pelvis clench, sending a stream of fluid into her sex, ruining her lacy underwear. Ruining her soul. She cried out: “Oh…” A high-pitched moan, as one tentacle slithered between her breasts while the other increased the pressure at her nub.

“But this isn’t what I asked for!” She whined, arching her neck as the tentacle’s suckers kissed every inch of her bare torso. “This isn’t enough!”

“Yes!” She grabbed a handful of her skirt and lifted, exposing her thighs, her crotch, wanting to rip off the panties and toss them away. “I want it all!”