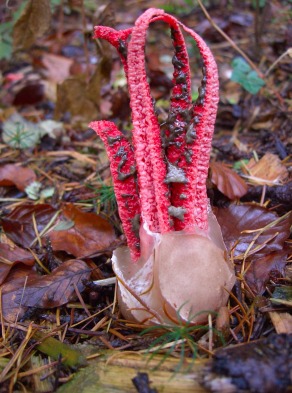 The gate swung closed with a creak, and Agatha hastened her steps as she pattered across the short courtyard. It was a cool evening with little cloud cover, the moonlight shining bright on the front of the church.

It was then that she saw it, reaching out from under the old willow like a half-buried claw. Bright red tentacles with black speckles. She hadn’t seen any since she was a child, but she recognised the fungus at once.

“Devil’s Fingers,” she muttered, almost to herself, then drew a sharp breath and glanced around, suddenly self-conscious. A quick cross over her heart, a silent prayer. Lord, forgive me for saying those words in a churchyard.

It was silly really, but the sight of it almost sent a thrill through her body, remembering how she’d come across one with Geraldine, her little sister, when they snuck off together to explore the meadows around Regent’s Cliffs. They’d been forbidden to go there, too many dangerous edges, too many steep drops. The memory of that disobedience, the excitement of the adventure, was strong and intoxicating. She laughed as she remembered. How old was she at the time? Fifteen? In ten years she’d never seen another plant quite like it.

She sighed and shook her head, still smiling at the memory, then turned, and headed into the church.

“Father Brock?” She called out as she closed the heavy oak door behind her, shivering a little and deciding to keep her coat on. “It’s only Agatha. I’ve come to check the flowers for tomorrow’s service.”

Odd that he didn’t answer. It was only just after eight, and he was always here until eleven or later on a Saturday night. Perhaps he was in the vestry, but even so he must have heard her voice echo in the cavernous, empty space.

Her footsteps clipped on the flagstones as she headed for the front of the church, glancing up at the empty wooden cross hung behind the altar and bringing into her mind an image of her lord and saviour. The scent of the flowers, arrayed on a white cloth beneath the stained glass window, was a low undercurrent to the heavy musty smell that always filled the interior of the church. But it was important to make the effort.

Loraine, one of the other ladies, had brought the flowers in – her turn on the rota. She’d done her best to arrange them, but they needed some tidying. That was where Agatha excelled. She’d done arrangements for Father Brock for the past four years, and for his predecessor, Father Highman, for three years before that.

“Father Brock, are you here?”

Perhaps he’d been called away on urgent business? One of the parishioners in need. But too urgent to leave a note? Agatha hoped that everything was all right.

As she climbed up the steps that separated the chancel from the nave, the church was plunged into darkness. Agatha almost fell, but clasped her hand to the top step to steady herself. At first, she just thought a cloud must have passed over the moon, but when the light didn’t immediately return she realised that couldn’t be the case. The chandeliers had been burning, the interior had been lit.

Feeling her heart rate rise just a little, she glanced around, trying to determine what could have extinguished them all at once like that. She prided herself on her rationality, her presence of mind, but even so…

“Is anyone there?” She called out into the darkness. Silence greeted her.

Suddenly unsure, she started to back away from the chancel. In her mind, she had been safe when she was in the aisle. Did she sense a presence, or was it just her mind playing tricks?

She stepped backwards, not sure why she didn’t turn but unwilling to take her eyes away from the altar.

And then it happened.

Without warning, the flowers burst into flames. They didn’t spark, the fire didn’t spread slowly among them.

One second there was nothing, the next they were ablaze, lighting the front of the church.

Agatha screamed. She couldn’t hold it back. She screamed and stumbled, flailing to keep her feet, and saw an impossible sight. It couldn’t be true. It had to be all in her mind. But she saw it as clear as she had ever seen anything in her life.

A single, leathery tentacle, grotesque and enormous and unnatural. Red like the Devil’s Fingers out in the churchyard, speckled with black welts. It slithered and wrapped, snake-like, around the wooden cross, descending, descending.

Heading inexorably for the floor of the church.