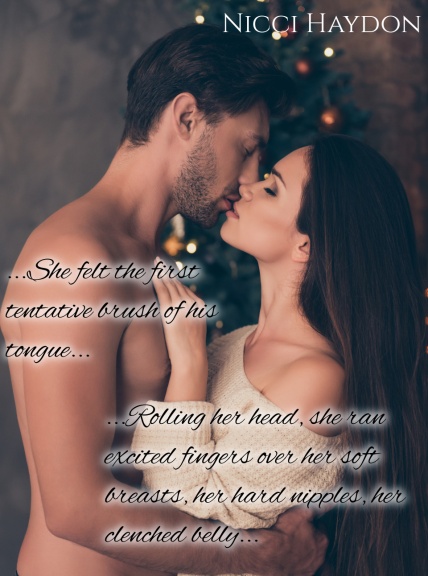 This is Part 5 of an ongoing story. If you haven’t already read them, I suggest you check out On His Naughty List Part 1, Part 2, Part 3 and Part 4.

Loman hesitated, his eyes roving over her stretched body, and Michelle had a moment of panic imagining that he might refuse her, all her insecurities threatening to take over and make her flee. No man had ever gone down on her. The idea that Derek would be that sensitive to her needs was almost laughable. He hadn’t taken her virginity, of course, there had been two others before she met him, and one…well, that wasn’t her finest hour…but she’d never had the confidence to demand this of any of them. The idea of another person getting so close to her sex, seeing how damp she was, smelling her scent, tasting it…the what if’s started tumbling in her mind. What if he found her pussy repulsive? What if the whole thing made him vomit? What if he later compared her to younger girls and was disgusted by what she’d asked him to do?

The honesty sparkled in Loman’s eyes. He wasn’t making excuses. He wanted to please her, was desperate for this to be memorable, but he simply didn’t have the experience.

Pushing aside her doubts, her fears, Michelle took hold of the waistband of her pyjama bottoms. Wriggling her ass, she slid the material down over her hips, slowly exposing her pelvis. She kept her pubic hair trimmed, a narrow delta of short hairs that she felt suited her when she looked in the mirror. As she stroked the fingers and palm of one hand along her mound, she hoped he thought the same.

He nodded, a tiny, almost imperceptible movement. “I want to.”

As he crouched at the foot of the sofa, Michelle swallowed back the dryness in her throat and inched her knees apart. The sudden rush of cold air made her shiver as her damp lips were exposed. She kept her eyes on Loman’s, watched the lust dawn in them and felt something unfamiliar rise in her breast. Pride. What was it Yasmin had said? If I looked like you, I’d be screwing every young stud in a twenty mile radius. She almost laughed out loud at the memory, but still…yes. She still had it. And she shouldn’t be shy just because society said it was a woman’s place.

“I want you,” she said, drawing Loman’s attention. “Please. Taste me.”

He nodded and leaned forward, bringing his head close to her cunt and she almost cried out as the anticipation tingled in her belly. Just the thought of the word – cunt – was almost sacrilegious. It was dirty, wrong, frowned upon. Just like what she was doing right now, and who she was doing it with.

She gasped as Loman’s mouth made gentle contact with her soft petals. His satisfied moan and the heat of his breath on that most sensitive flesh forced her pelvis to contract, making her squirm against the cushions to hold back the rush that threatened to leak from her body. Michelle reached out with her hands, pushing against the arm of the sofa to bring herself into firmer contact with his mouth, and felt the first tentative brush of his tongue.

A long, low groan fell from her throat and she let her eyes drift closed. It wasn’t just the physical sensation – though that was special and new and exciting – it was the idea of being loved like this, worshipped like this, as a woman worthy of such intimate attention. Growing bolder, he lapped at her wet lips, his tongue just touching her clit as he moved forward, sliding over the hood and making her think she was in heaven.

“Yes,” she muttered. “Yes. Please. Fuck. Oh, fuck.” The words spilled from her mouth without thought as she rolled her head and ran excited fingers over her soft breasts, her hard nipples, her clenched belly. She fought with the buttons on her pyjama top, suddenly hating the constricting fabric, and when Loman’s tongue glided back down, hitting her swollen nub, she lost control; gripping the material, she flung her arms wide, tearing buttons as she exposed her sweaty, naked flesh.

For a moment he moved so fast she thought he was going to tongue her asshole. She gasped in anticipation, her mind spinning as she wondered what it would feel like, but instead he thrust the pointed tip of his tongue deep inside her pussy.

Michelle couldn’t stop the laugh that shook through her at the sensation. She giggled and sighed, half relieved by the momentary pause at the failure. It was sweet, cute, adorable. She would have kissed him if his face had been near enough.

“Your tongue isn’t a cock, darling,” she whispered, trying to bring her giggles under control to spare his feelings. “Don’t try to use it like one. It was perfect just as it was. Slow, gentle licks.”

She laughed again. “It’s fine. Don’t be sorry. This is wonderful. I love it. Slow, gentle licks.” She lay back and raised her ass off the sofa, displaying her arousal for him, then sighed. “Actually, you could use your fingers too. The pressure might be nice.”

“Just pressure inside, on the front…like this.” She reached a hand down between her legs and dug two fingertips inside, pressing against the front wall of her cunt. “Just like that, rub there…fuck…”

“You like that, huh?” She met his eyes and he nodded. Enough lessons for today, her mind told her. Time to give back. “Come here,” she whispered, continuing to finger herself. “I said, come here.”

It was like he couldn’t decide where he wanted to look more. As he followed her instructions, rising up from his crouching position and wandering around to the side of the sofa, his eyes flickered between her face, her breasts, lingering on her taut nipples, and the movement between her legs as she squirmed and awkwardly manoeuvred into a seating position. It was clear from the way the Santa trousers tented over his crotch that he was straining to be free.

With her free hand, she ran a finger along his belly, tracing the V of muscles that led the way, then tucked a fingertip inside the elasticated waistband of the trousers and dragged it down.

If you’re enjoying On His Naughty List, check out my collection of short stories, “Strip or Dare“, which showcases some of the naughtiest girls my imagination has cooked up!

10 thoughts on “Free Erotica: On His Naughty List Part 5”